A range of forums, open to the public, for general support and more specific queries. All traders are invited to contribute. Do not hold back if you can answer a question, or add your own perspective. We are all here to learn to trade well. Wishing you all success. 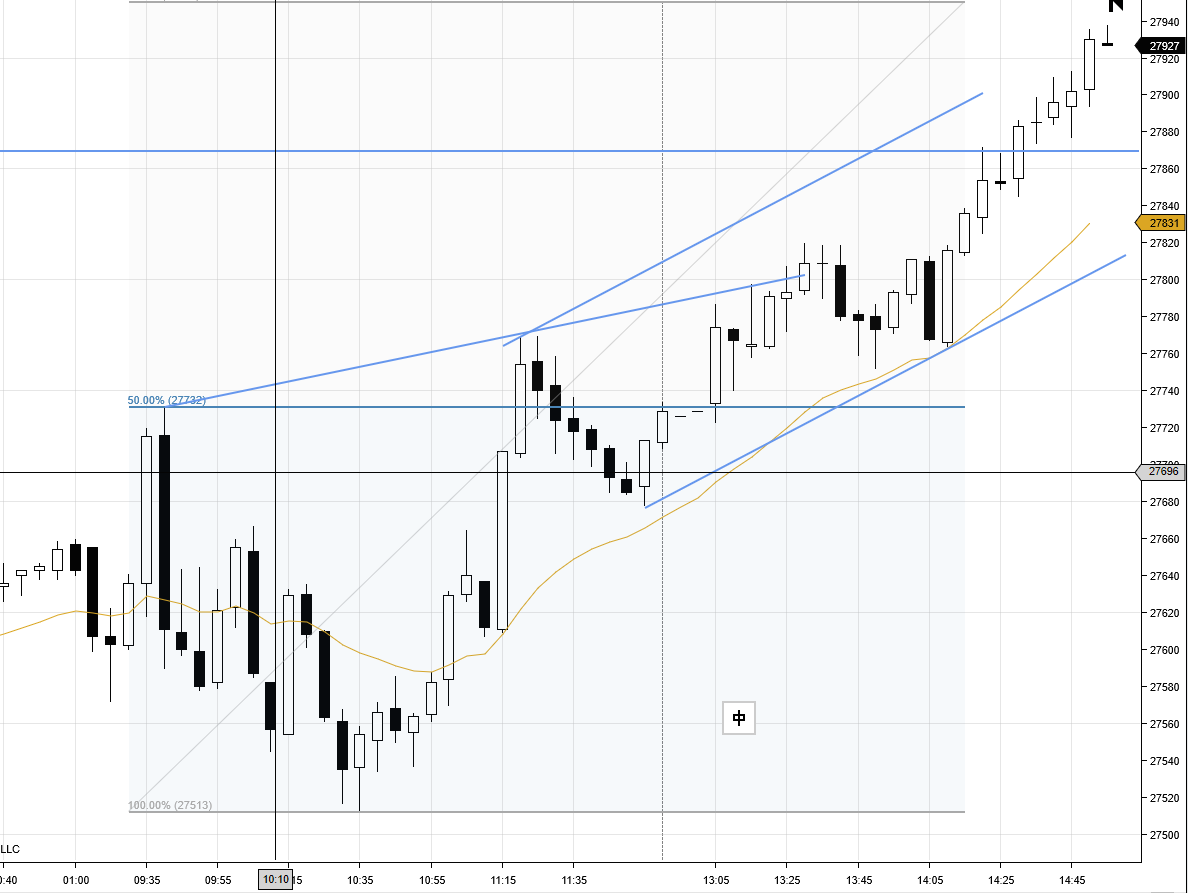 Hi guys, so I am trading MHI (min hang seng index) and I often get confused on how to trade bull channel and wedge top

For example (the pic above), price broke out  of the opening TR and I got long at the closed of the breakout bar, price corrects a bit and I add 1 more position above H1 bull bar

after that, I exited all the positions at bull doji bar (near the top of 1st  blue trendline from the top of opening bar I drew), price then went down a bit and bounced back up and went up to the top of bull channel

I wanted to get long again above the bull bar ( 2nd bull bar that touched ma line) but I thought it was a wedge top and it should has 2 legs down and price was at the top of wedge top (3rd push up), so I didn't dare to get long

Looking back now, obviously it's a spike and channel phase, but what kinda factors do you guys consider on whether or not price would  go up to the top of bull channel rather than having a reaction at wedge top?

Here's the factor I would consider:

1) is price above or below ma line?

are there any factors that I missed out??

It would be nice if anyone could share their thoughts!! appreciate it

This is my rationale.

After the bull bar closes (2nd bull bar that touched MA) I would have considered 2 things:

1. Context. There's a lot of bullish pressure (lately there are more bull bars and bigger than the bear bars).

2. A signal bar. The previous bar is a big bear bar, maybe indicating the wedge top, but it's "alone". The bull bar is bigger and reverses completely the bear bar: it's a very strong reversal bar.

If still unsure, wait for the next bar (reasonable bull bar closing near its high) to confirm the continuation of the bull move.

yea I kinda figured out after I calm myself down, it has a negative gap and not a lot of overlapping bars which indicated bull strengths

If you think it's a leg in a bull trend, or maybe even a strong bull trend.
Then expect most reversals to fail, including wedge reversals.
(Strong bull BO spike, strong bull pressure, and we've been completely above MA for 20 bars or so, the first break below MA, should result in a retest of prior high and a TR at worst, until a MTR appears)

You could say that your wedge had a 2 legged correction, with the 2 attempts down, made by the bears,
creating a double top, with 2 strong bear signal bars, at about 13:40 and 14:05 o'clock on the chart.

If you believed it to be a bull leg in a TR, The wedge top would be an acceptable short, on the 2nd entry at 14:05.
Meaning a lot of weak bears got trapped in(probably with a stop above the signal bar, or the prior top).
And scared bulls such as yourself (no offense meant) got trapped out, because they believed the market may go down.
The Bull setup bar bouncing off the MA at 14:10, immediately proved the bears wrong,
The bears' stops are almost triggered and they are falling over each other, in a desperate attempt to get out of their positions.
At the same time the strong bulls are buying into a great setup for a bear trap and bull trend continuation.
Over the next many bars the weak bulls are buying, to get in on the move.
And the weak bears are buying to get out, as it gets too painful to be in their shorts.
Strong bears, may have shorted at the double top bear reversal signal, but they realized the bulls were too strong.
So now they're just waiting to scale in higher, and will first do so when a credible top has formed a good many bars later.
There's no one left to sell, and everybody else is buying. Market is going up.

There's no right or wrong,
Personally I would have been looking to short on a 2nd entry short after the bull BO, that you bought, because at that time I believed it was a TR, and the BO being a 2nd leg trap. The bull BO was too strong to go short on a 1st entry.
But the 2nd signal didn't come until 13:35. And somewhere over the last 30 minutes I would probably have started believing this was turning into a bull trend and not a TR, because of the increasing bull pressure, and bears slowly losing ground.

If you "don't dare" to take a trade, that you believe may be a good one, then consider trading a smaller position, especially while learning.
If you trade "I don't care size" then it takes off some of the emotional pressure off, especially while learning.
And you will be able to take all the good setups you see.
And yes, some will turn out to be losers, but you won't care. There will always be losers, no matter how good or right your setup is 3-4 setups out of 10, will be losers. The key is to not be afraid of taking a losing trade.

I can recommend Al's book series with the 3 books on "trading price action"
It's a tough read, but if you have been through some of his courses, it's easier to visualize the material in the books.
And just read a few pages every day and take notes, or pick certain topics for improvement.

You gave us a master class. Thanks Emil.